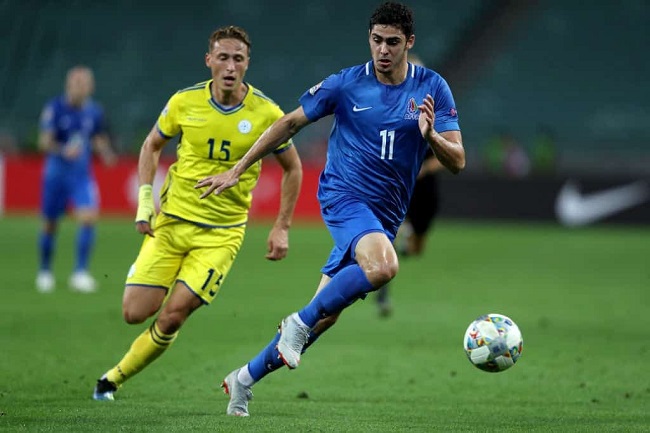 When Azerbaijan and Belarus meet at the Dalga Arena on Monday evening, they will be looking for their first wins in the UEFA Nations League 2022.

Following dismal starts to this year’s competition over the first two weeks, the two nations appear to be heading for a relegation struggle in Group C3.

Azerbaijan vs Belarus Tips and Prediction

With a 1-0 loss to Slovakia on Friday evening, Azerbaijan’s winless record in all competitions extended to 13 games.

Giovanni De Biasi’s side kept their superior at arm’s length for much of the match in Baku, despite seeing very little of the ball and withstanding multiple attempts on their goal.

However, after scoring an 81st-minute winner for the visitors, former Manchester City midfielder Vladimir Weiss insured that Azerbaijan would go home empty-handed.

As a result, the hosts are in last place in Group C3 coming into matchday four, making Monday’s match against Belarus essential in their bid to prevent relegation to League D.

Picking up three points would put them in charge of their own destiny heading into the group’s final two games in September, although achieving the needed result could be difficult given their current goal-scoring woes.

Azerbaijan has yet to score in the Nations League this season, and they have now gone seven games without scoring in the league, following four successive failures in the 2020 campaign.

However, a tie against their fellow strugglers will give them some hope, especially on home turf, so De Biasi will be aiming for his team to get off to a good start while also lifting them off the bottom of the league.

Visitors Belarus, however, have struggled in their first three Nations League matches, as previously reported.

On Friday, Georgi Kondratiev’s team got off to a good start in front of goal when they hosted Kazakhstan, but Vladislav Malkevich’s goal six minutes from time was only good enough for a point against the group leaders.

Belarus now sits in third place ahead of their hosts on Monday, with a one-point advantage following last week’s draw between the two sides.

Belarus’ struggles thus far in the June internationals contrast with the country’s performance in the previous few months, when it won three successive games against Jordan, India, and Bahrain between November 2021 and March this year, albeit in international friendlies against weaker opponents.

Kondratiev has put together a well-drilled squad in recent months, with only two goals conceded in their previous five matches across all competitions, ensuring they remain a difficult side to beat no matter the opposition. As a result, if they score in Baku on Monday, they will be well on their way to securing a critical three points in their fight to escape relegation to League D in the Nations League, against a team that is also struggling in the last third of the pitch.

As previously stated, this promises to be a tight Group C3 match on Monday evening, with two teams in desperate need of points after a string of dismal results.

Because both teams’ confidence levels are anticipated to be low, particularly in the last thirds of the field, goals are expected to be scarce, with home advantage possibly proving crucial for Azerbaijan to snare all three points by a razor-thin margin.