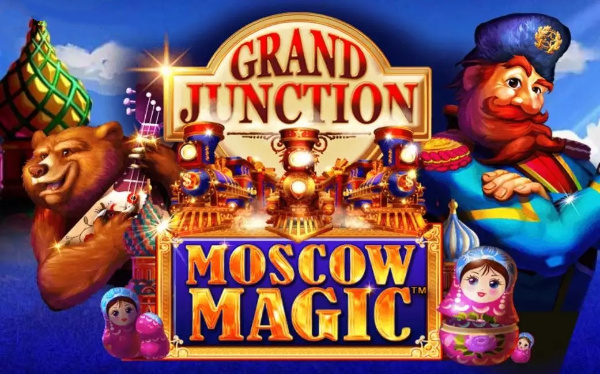 Playtech kicked off the series with a strange mix of steam trains and Inca culture, but in Grand Junction: Moscow Magic, we’re getting something that suits the trip concept a little better. For the second slot machine in the series, we’re travelling to Moscow, and because this is a city and a culture with so much to offer visitors, there will be no shortage of interesting symbols to find. They didn’t use the theme to its maximum potential, however the themed symbols look fantastic.

Grand Junction: Moscow Magic includes a total of 5×3 reels and 50 paylines for the player to choose from. The best prize it has to offer is a 2,000x stake Grand Jackpot, which is paid out through the slot’s best feature. Overall, the risk/reward ratio is good, with the volatility set at medium and the RTP at 96.51 percent. The Grand Junction feature, free spins, two scatters, and the Towers Wild are among the game’s primary features.

Grand Junction: Moscow Magic has the potential to pay off handsomely, but only if you can get the primary features up and running. Grand Junction has a Grand Jackpot worth 2,000 times the bet, which is the main goal. Regular winning combos pay up to 40 coins per line, therefore the maximum payout in a single spin is 2,000 coins (200x the stake).

While the main game doesn’t pay very much, the top prize is well worth a medium volatility release. The slot’s RTP of 96.51 percent is another strong point in its favor.

The Towers from Red Square will appear as the wild symbol, landing on all five reels and acting as a substitute as well as one of two symbols that pay the most when completing their own wins (up to 40 coins per combo). This is merely a substitute for the regulars; it does not replace the two scatters.

The Faberge Egg, which is red and gold in color and can only appear once each reel, is the first of the two scatters. If you get it on 3, 4, or 5 reels, you’ll win 1x to 50x your bet, plus you’ll get 11 free spins. This feature can be retriggered in the same way and with the same number of extra spins. The top symbol and wild are clumped together in groups, which is a significant distinction.

You’ll need 5 Steam Train icons to land at the same moment to go to the primary feature, the Grand Junction. It is divided into two stages:

Hold and Spin for a total of 9 rotations. New money and Trains become sticky in this mode, and conductors provide you three additional spins. You can win up to 5x your stake by collecting coins, and you can advance to the second stage by collecting 3 to 6 Trains.

One of the four set jackpots can be won in the Bonus Game. There is only one spin available, which will result in many numbers appearing, one per reel, or Trains landing and giving you even higher numbers. When all of these numbers are added together, a score is generated, which determines the jackpot and which of its four values will be delivered. A score of 44 to 50 is required for the top one.

For the slot’s motif, there is a train and Moscow combination in theory. In actuality, you hardly ever see the Train icon, especially though it can trigger key features. The background will be Moscow’s Red Square, and the reels will have both connected and unrelated iconography.

Six Royals, from Nine to Ace, are found in the unrelated ones. The Matrioshka Dolls, a Tea Samovar, a Bear, and a Cossack Man are depicted in the upper ones. Towers, Faberge Eggs, and the Grand Junction emblem are all featured.

Overall, the design and subject are superior to those seen in the last installment of the series.