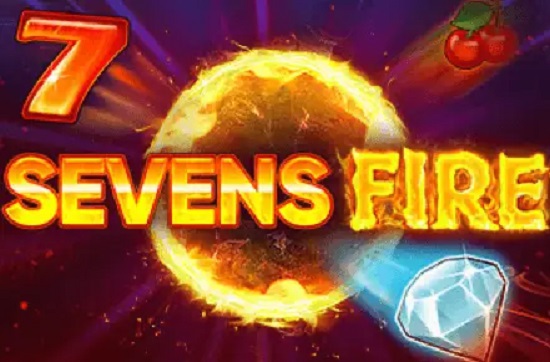 Gamomat is kicking off 2022 with a classic slot machine named Sevens Fire, which is devoted to the number Seven and the usual array of oldies that come with it. It shouldn’t come as a surprise to anyone, especially when it comes to the graphics. However, if you’re a lover of the genre, you might still enjoy it.

Sevens Fire is a five-reel, three-row slot with ten paylines active in each round. It has a medium level of volatility and a 96.13 percent RTP, indicating that it is a fair game, with top wins worth up to 3,500 times the stake. The major features you’ll find inside are the Diamond Wild, bonus symbols, and Fire Respins.

Sevens Fire is capable of paying up to 3,500x the investment ($350,000 cash) when using its respins. Given the medium volatility and 96.13 percent RTP of this slot machine, I’m pleased with the amount you can win (I’d say the risk balances the possible return).

Despite the fact that the Diamond Wilds used within are limited by the reels on which they can land (2nd to 5th reels only), I believe they are powerful enough to make a significant difference. They’ll seem stacked, which means that while they can cover entire reels, they’re usually just half visible. In any case, all visible wilds are employed to assist construct new combinations on the lines where they’re present.

The main characteristic of Sevens Fire, on the other hand, is a different one. It centres around Fire Orbs, which appear stacked and across all reels. To activate the Fire Respins, you must have at least 5 of them visible at the same time.

The main characteristic of Sevens Fire, on the other hand, is a different one. It centres around Fire Orbs, which appear stacked and across all reels. To activate the Fire Respins, you must have at least 5 of them visible at the same time.

You begin with three Fire Respins and the sticky Fire Orbs that trigger them. Any new ones that come in will become sticky as well. Every time you play, you’ll either earn Fire Orbs or vacant places. Each time new Fire Orbs appear, you can reset the number of respins.

Each Fire Orb will pay a prize, the quantity of which will be inscribed on them.

If all 15 symbol positions are filled with Fire Orbs, the Inferno Bonus will be triggered. It is worth 500 times the stake.

The slot’s design includes a fire aspect, but the title also mentions the Sevens, so you may have guessed that it has a classic side to it as well. The Fire Orb is the only one-of-a-kind emblem in use. Another one that will come in handy is the Diamond Wild. The Seven, Double Bar, Bell, Bar, Watermelon, Grape, Orange, Lemon, and Cherries are regular symbols.

Overall, it might appeal to someone who enjoys Hold & Win-style respins. The combination of the classic appearance and the modern functionality appears to be rather appealing. If you prefer something more visually appealing, you can have those same functions in much better-looking slots.